This is why, and how, climate skepticism matters in 2015: The most storied science agency, NASA, of the biggest national carbon emitter, the USA (in per capita/annual and total/cumulative terms), just suffered a slash to its funding. The House Committee on Science, Space and Technology approved 2016 and 2017 NASA budgets that reduce science funding by $323 million.

One of NASA's missions is to understand how our planet works. Chief among this quest is keeping track of climate change. NASA's climate research is part of the agency's Earth science program. In the current fiscal year, this program is funded at $1.773 billion. President Obama requested $1.947 billion for 2016. But the new budget, just approved, is $ 1.450 billion under the 'if-all-goes-well' plan, the so-called aspirational scenario, or $1.199 billion under the 'if-we-need-to-tighten-our-belts' plan, the constrained scenario. Compared to 2015 funding, the aspirational scenario constitutes an 18% cut; compared to Obama's request, it's a 26% cut. The constrained scenario amounts to a 32% cut; compared to the request, it's a 38% cut.

Why is this happening? Because the members of the House Committee believe NASA should deal with outer space, not with mother Earth. As NASA Administrator Bolden rightly understands, this move is intended to gut NASA's Earth science & climate program.

And why the members of the House Science Committee wish to gut this program? Because the Committee Chair Lamar Smith (Republican) is a climate denier.  This is the logic of skepticism: since the skeptic would have to change his mind if he were scientifically literate, he uses his power to fight against scientific literacy.
Posted by Mad Hun at 6:50 PM No comments: Links to this post

Since the exposure to a new kind of scientific illiteracy that doubts the negative consequences of climate change, news on such consequences catch my attention. Case in point is a recent paper by Mark Urban in Science 348 (May 2015): 571-573, which has been noted in the mainstream press (see here and here). Over impacts on biodiversity, this updates older estimates. A textbook summary (2009) on negative impacts was Michael E. Mann's and Lee R. Kump's Dire Predictions: Understanding Global Warming (a 2nd edition is currently in preparation), based on the 2007 AR-4. Here's a screenshot of Mann/Kump p. 108: 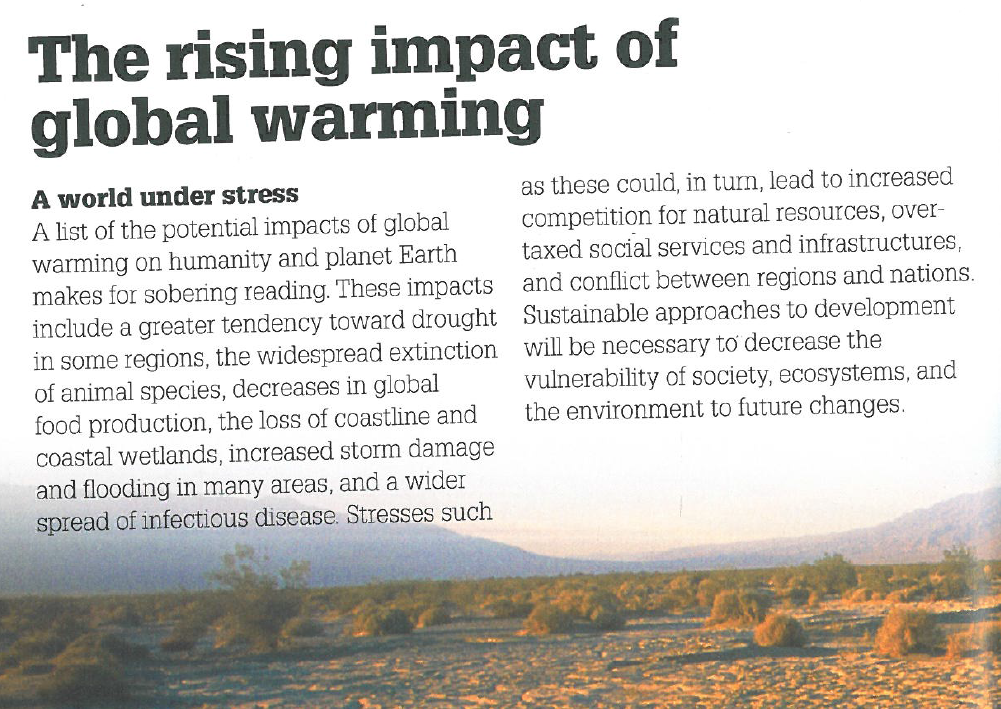 On p. 109 is a scale of impacts and temperature rise:

Biologists worry that the rapid rates of warming projected for the planet will doom many species to extinction. Species could face extinction with climate change if climatically suitable habitat disappears or is made inaccessible by geographic barriers or species' inability to disperse. Previous studies have provided region- or taxon-specific estimates of biodiversity loss with climate change that range from 0% to 54%, making it difficult to assess the seriousness of this problem. ... Urban provides a synthetic and sobering estimate of climate change–induced biodiversity loss by applying a model-averaging approach to 131 of these studies. The result is a projection that up to one-sixth of all species may go extinct if we follow “business as usual” trajectories of carbon emissions.

Older studies show a wide variation of estimated losses, which is no big mystery, since estimates vary with temperature rise as well as with region. South America will be hit hardest, Europe will be spared the worst, and how hard Asia is going to be hit needs further research. (That South America may lose a quarter of its species makes sense due to its huge diversity in the Amazon Basin.)  One factor that apparently does not create extra variability is taxonomic group. That's new. Conventional wisdom says that amphibians will suffer disproportionately, but the meta-analysis doesn't seem to bear this out. The upshot now (2015) is this:

Overall, 7.9% of species are predicted to become extinct from climate change; … Results were robust to model type, weighting scheme, statistical method, potential publication bias, and missing studies … The factor that best explained variation in extinction risk was the level of future climate change. The future global extinction risk from climate change is predicted not only to increase but to accelerate as global temperatures rise … Global extinction risks increase from 2.8% at present to 5.2% at the international policy target of a 2°C post-industrial rise, which most experts believe is no longer achievable. If the Earth warms to 3°C, the extinction risk rises to 8.5%. If we follow our current, business-as-usual trajectory [4.3°C rise], climate change threatens one in six species (16%). Results were robust to alternative data transformations and were bracketed by models with liberal and conservative extinction thresholds. (Emphasis mine. Condensed and with annotations deleted; cf. Mark Urban, loc. cit., 571).

Four points are noteworthy:
That's it. Not trying to be too negative here, but other dark clouds are looming, too. One is a possible upwards correction of the probability of nonlinear changes--global warming may move faster than expected. Another is that we have now a one in ten chance that global warming will now shift on a new track: 6 C, not 4 C.

In either of these cases, Mann/Kump would be right on target.
Posted by Mad Hun at 5:07 PM No comments: Links to this post

the geography of denial

The Pulitzer-Prize-winning website Inside Climate News has an excellent post on the geographic differences in the understanding of climate change, titled "U.S. is Laggard Among Developed Nations in Understanding Climate Change". The source is given as "a 2010 Gallup poll on climate beliefs in 111 countries" and the data "was part of a 2015 analysis by Cardiff University (UK) researchers examining climate attitudes since the 1980s". The analyst is Stuart Capstick at Cardiff's School of Psychology. He is the lead author of "International trends in public perceptions of climate change over the past quarter century," an open access article in WIRE: Climate Change 6 (2015): 35-61. Inside Climate News cites a great graphic from this study:

Posted by Mad Hun at 9:22 PM No comments: Links to this post

Posted by Mad Hun at 1:13 PM No comments: Links to this post