Typhoon Haiyan’s Deadly Surge Noted in Warsaw Talks: As the COP 19 discussions were being held, the Typhoon Haiyan made landfall in the Philippines. This article talks about the impact it had on those discussions.

COP 19 Warsaw Wrap-Up: Where Does a Global Climate Deal Stand? This article briefly explains the events of the COP 19.

Sen. Sanders: 'Global Warming a Far More Serious Problem Than Al Qaeda This statement might seem obvious to those who understand the risks associated with climate change, but it is rarely stated in terms like this by politicians. The full interview can be viewed here, via Playboy.

Texas emerges as unlikely leader on wind power: When I think of Texas I think of boots, belt buckles, and cattle. It seems as if we should add wind power to the list. As oil wells dry up the state is looking for other options, and they are betting on the wind.

Norway’s Billions Could Go Into Renewables Norway is sitting on a pile of cash worth over $750 billion and it appears as if investing heavily in renewables is on the table. The results of this investment could be a game changer.

New Coal-Fired Plants Ban To Take Place In Beijing, Shanghai And Guangzhou China: The air quality in China is know to be at dangerously poor levels. This is one of the first official announcements limiting coal power in such a broad way, as an attempt to improve the situation.

Upcycling at its finest: Upcycling is taking something of low value, and making it into something more valuable. This is an alternative to throwing something away, or recycling, a sneak preview of the future.

Financial Pressure Grows on Fossil Fuel Industry: As science on climate begins to converge with divestment and other anti-fossil fuel initiatives, companies heavily invested in fossil fuels are beginning to receive questions about their long term viability. The "sure bet" of coal and oil may start to be more of a gamble

Climate science lawyers up: As the climate reality sinks in, those in favor of the "Business as Usual" model are using legal tactics to harass climate scientists. In response scientists are learning to defend themselves from this emergent tactic of denialists.

Bringing Back the Night: A Fight Against Light Pollution: Light pollution is something often ignored due to more pressing environmental concerns. however, it is also very easy to remedy. Mandating "lights out" after night will make cities greener and bring back that "starry sky above."

Posted by Deviant Yank at 9:23 AM No comments: Links to this post

The Coming Revelation Of The 'Global Warming' Fraud Resembles The Obamacare Lie: In this article a contributor to Forbes known as Peter Ferrara explains how climate change and Obamacare are both "designed" by liberals to take away personal rights of people (Obamacare) and industries (global warming) in order to give them both over to the government, and of course, the U.N.

So how does Mr. Ferrara come to the conclusion that global warming is a sham? He mentions criticism of the AR-5 that comes from a group of Scientists that contributed to the document Climate Change Reconsidered II.These scientists claim that the evidence for climate change is shaky, and inconclusive. In the article he mentions four specifically, Craig Idso, Robert Carter, S. Fred Singer, and Willie Soon. Lets see if we can find any of these fellows on a google search...

Heartland Institute faces fresh scrutiny over tax status: Apparently the organization know as the "Heartland Institute," which bankrolled the Climate Change Reconsidered II, is being accused of purposefully undermining scientific discoveries about climate change. This institute is funded by donations from many large corporations, and private donars (which are normally anonymous, more on that later.) According to this article, the Heartland Institute paid Craig Isdo's organization $11,600 a month to produce this paper, and  S. Fred Singer made a paltry $5,500 a month for his contributions. Don't feel too sorry for Fred though, according to this website his organization (of which he has been the sole member of for 20 years) has accumulated over $1.5M tax free, mostly from the Heartland Institute.

Lets look another individual on the list, Robert Carter. There are a few tidbits concerning him on the internet

Australian University Dumps Bob Carter, Advisor To Multiple Global Climate Science Denial Groups: According to this article, Bob Carter has been removed from an unpaid adjunct professorial status (how do you get fired from working for free) and it seems that last year he was offered $1,667 a month for his work with the Heartland Institute. Skeptical Science is even keeping tabs on Bob over here, in a effort to document his claims.

So what about Willie Soon? It appears that in 2003, he produced research that argued current climate conditions are unremarkable when compared to climate events in the past 1,000 years. According to this article, that study was underwritten by $53,000 from the American Petroleum Institute. According to this article by the Boston Globe about Soon...


Over the last dozen years, he has received research funding of more than a $1.2 million from sources such as ExxonMobil; Southern Company, a foundation run by the Koch brothers, conservative energy moguls; and industry trade group American Petroleum Institute, according to public documents obtained under the Freedom of Information Act by Greenpeace, the environmental advocacy group.

The four researchers cited in this article all have ties to Heartland Institute, as well as other organizations with a vested interest in continuing with a "business as usual" approach to climate change. The next logical question is  who funds the Heartland institute? In a leaked document, the following people and organizations were documented giving to the institute: GlaxoSmithKline, Microsoft, GM, anonymous private donations (one donor gave 14M over several years), tobacco and alcohol companies, as well as...


Yep, you guessed it the Koch brothers! So there you have it, the evidence against climate change comes from a report that argues against the  IPCC's findings, which comes from research backed by private organizations and individuals, which have a strong vested interest in denying climate change. And what about Peter Ferrara, the articles author? Besides writing for Forbes, he just happens to be the "Director of Entitlement and Budget Policy for the Heartland Institute." Now we truly have gone full circle.
Posted by Mad Hun at 12:20 PM No comments: 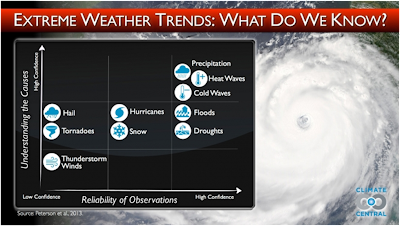 Someone has compiled data of record setting, and otherwise odd weather for both the year 2012 and 2013. So much for the "halt in global warming" that climate skeptics like to point out.

The Amazon Rain Forest Is Drying Out, Probably Because Of Climate Change: Climate scientists have warned for a long time that a warming world could leave the Amazon Rainforest dry, and now data is confirming an increase in the duration of the Amazon's dry season

Alaska Roasts During October, Reigniting Wildfire: Climate models predict that global warming will result in greater increases in the temperatures at the poles, compared to the tropics. This article highlights the unusually warm weather in Alaska during October

July 24th: Heat Wave continues in Siberia: July is always warm in Tampa Bay, however this year Siberia gave us a run for our money. Norilisk, one of the most northerly cities in the world, clocked in at 32.0°C (89.6°F) in July of this year.

Last Time Arctic Was This Warm Was 120,000 Years Ago: We know its getting warm in the Arctic, but to add some context to that statement, the last time it has been this warm was well before humans discovered agriculture.

Analysis: Waterworld USA: Climate Harming Regional Waters: This article delves into regional water challenges for the united states, based on climate change predictions. It looks like we are in for water scarcity, flash floods, and droughts. At least for the time being we still have enough water to keep fracking

Climate Change & The Jet Stream: New research on climate change is showing that as the planet warms the jet screen gets "wavier," that increases the probability of more extreme weather events

Colorado’s ‘Biblical’ Flood in Line with Climate Trends: How do you end a drought? One way to do it is with a 1 in 1000 year deluge. As the chart illustrates below, the Boulder area was in a drought, until this one rain event came to town

Tar sands hell in Detroit: What happens when you combine the Koch brothers with a legally appointed dictator? Find out in this article (spoiler alert, middle class Americans get screwed)

Energy companies fighting solar power: In California, large energy companies are attempting to stop consumers from installing battery arrays, by claiming they are fraudulently storing conventional energy and reselling it on the grid.

Deepening disenlightenment: The peak oil myth of those tree hugging environmentalists is over, its time to frack our way to fossil fuel abundance and celebrate our rightful return to global dominance, what could possibly go wrong?

Ecuador seeks global solutions, globe isn't interested: Ecuador is sitting on large reserves of oil that is located under old growth rainforest. In an attempt to justify not developing this lucrative resource, Ecuador proposed the world pay them a small portion of its actual value, to keep it in the ground and preserve one of the worlds few remaining  biodiversity hot-spots. Guess what happened...

Responding to climate change and vanishing Arctic ice by gearing up to drill for the stuff at the root of the problem is insane.
David Suzuki 3 Feb 2013

Virtually all of the other OECD countries, and most developing countries including China, India, Mexico, and Brazil, have accepted the judgment of climate scientists.
Steven Chu, 1 Feb 2013, US secretary of energy,
in his resignation letter


Figuring it all out


Welcome to the anthropocene