For a long time, the Antarctic has been a bit of an anomaly for climate scientists. While the arctic sea ice cover has changed dramatically in recent times, with new sea lanes opening, and entire ecosystems being threatened, Antarctic sea ice has not seemed to change that much. 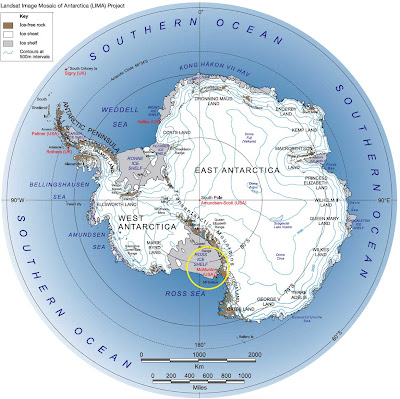 Anarctica is divided into an east and west section, which can be seen on the image above. The grey in this map represents large ice shelfs, which are over open ocean (making them sea ice.)  As most who are interested in climate change know, this sea ice does not directly contribute to sea level rise, because they are already displacing water. The real problem comes from the ice that is over land. Unlike in Greenland, the Antarctic topography is a gradual slope from the Tans-antarctic Mountains to the ocean. Without sea ice acting as a barrier, the mainland glaciers can potentially "slide" into the ocean, in perhaps a very dramatic fashion.

It is with this background information that recent evidence becomes particularly sobering.  according to this article:

a NASA study concludes that the melting of the West Antarctic Ice Sheet (WAIS) has "past the point of no return." This now unstoppable state of retreat will lead to a rise in oceans of 10-13 feet. To put this into the perspective, the remnants of Miami will be an island chain with most of the city submerged. It turns out the culprit for this retreat is not so much the warmer air, but a warmer ocean. The warmer ocean is melting the glaciers from below, and "lubricating" them as the slide into the ocean. In another study, models showed these glaciers experiencing a "rapid collapse" between 200 and 1,000 years in the future.

This is bad news, but not particularly shocking. The WAIS is know for it's rapid movements and potential instability, but the East Anatarctic Ice shelf, which was believed to be much more stable may be in for some trouble as well.
according to this article:

While this study shows we have some time before this collapse finishes (5-10k years) it will still add 10-13 feet to sea level rise even if the climate stops warming. Taken together these data points show that we are committed to at least to a 20-25 foot sea level rise in the future. The only question now is the time frame for this rise and if we will adapt to it.

In terms of climate science, the Antarctic ice sheets represent some of the largest wildcards in the field. Even with a linear decline, they pose problems to future civilizations, but with possibilities of rapid collapses and sheer volume of water stored in them, they represent a more immediate threat to ourselves, and our children than many of the other "known unknowns" in climate science.
Posted by Deviant Yank at 7:42 AM No comments: Links to this post